Heaven and earth shall pass away, but My words shall not pass away. - Jesus Christ, Matt 24:35
Luke Mounsey
The Bible
Print

Having established God’s promise to preserve His Word to all generations from all who would dare alter it, the question arises, “Where is it?” If God’s Word is available today, then where is it? God’s inspired, preserved Word IS available today, BOTH in the original languages, AND in translations.

Preserved in the Greek 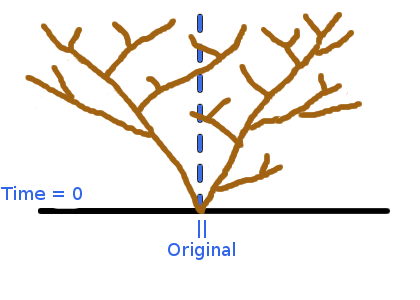 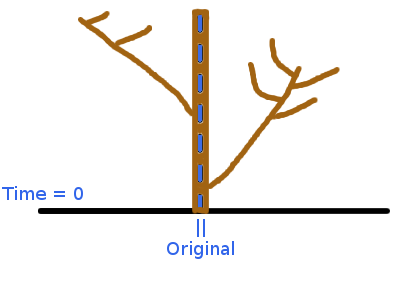 However, if preservation is true, than the bulk of the manuscript evidence will remain grouped very close to the original throughout all time periods, with only a few heretical branches as the only exception. The “evidence tree” will have a thick, upright trunk, with only a few branches, as shown in Figure 1b.

When looking at the manuscript evidence, one must first understand that there are several different branches, or text-types, of the Greek text. A text-type is a group of manuscripts containing a similar text, having a general agreement, especially on passages on which other manuscripts have different readings. The two main text-types are the Byzantine, and the Alexandrian. Which of these is the true Word of God? Most modern Bible versions have come from the Alexandrian text, while virtually all Protestant Reformation Bibles, including the KJV, have come from the Byzantine text. Critics of the Byzantine text have been forced to admit that 1) 95% of all NT manuscripts belong to this text-type 1 , and 2) virtually ALL manuscripts (99%) after 400 A.D. are of this text-type. Advocates of other text-types, especially the Alexandrian, insist that the Byzantine did not exist before 350 A.D. They claim that it is a recension (revision) of previous texts. However, if God’s Word is to be found in the Alexandrian text, then God has not preserved His Word, at least not to all generations. (“For the LORD is good; his mercy is everlasting; and his truth endureth to all generations.” Psalms 100:5.) For if the Alexandrian text is the Word of God, then the Word was lost for 1,500 years between the supposed revision of 350 A.D. and the rediscovery of this text in the mid 1800’s. (See Figure 2.)  Therefore, it is hard to accept BOTH the Alexandrian manuscripts AND Divine preservation; as these are contrary. God’s promise of preservation is the strongest witness against the Alexandrian text. Hence, most Alexandrian proponents deny a literal, to-the-word preservation.

In the late 1800’s, Anglican scholar John W. Burgon, the Dean of Chichester, and his colleagues studied and collated manuscripts of both text-types. He studied the five most revered Alexandrian manuscripts in depth. These include Alexandrinus (A), Sinaiticus (Aleph), Vaticanus (B), Ephraemi (C), and Bezae (D) 2. Of these, he wrote, “they render inconsistent testimony in every verse.”3 Of B, Aleph, C and D, he concludes “It matters nothing that all four are discovered on careful scrutiny to differ essentially, not only from ninety-nine out of a hundred of the whole body of extant MSS. besides, but even from one another.” 4 As an example, Burgon examined two small portions of scripture in the five Alexandrian manuscripts, as compared with each other, and with the Byzantine text (which he calls the “Traditional” text). He enumerated the alternate readings (those differing from the Byzantine text, including omissions, additions, substitutions, and transpositions) of the five manuscripts, also with the numbers of peculiar readings (those found only in one manuscript). In Luke 8:35-44 (a randomly chosen passage), he found 124 alternate readings, an average of 25 per manuscript. The number of peculiar readings per manuscript are: Codex A – 2, Aleph – 8, B – 6, C – 15, D – 93.5 Most importantly, Burgon lists the number of times the alternate (he calls them “various”) readings agree between the five manuscripts. In these ten verses, never do these five manuscripts agree on an alternate reading.6 In Mark 2:1-12, Burgon counted 60 alternate readings, yet the five manuscripts agree only once on an alternate reading.7 Of this variation among the Alexandrian manuscripts, Burgon makes the following note: “It must be further admitted, (for this is really not a question of opinion, but a plain matter of fact,) that it is unreasonable to place confidence in such documents. What would be thought in a Court of Law of five witnesses, called up 47 times for examination, who should be observed to bear contradictory testimony every time?”8 Therefore, these manuscripts are untrustworthy witnesses to the true text of the Word of God.

When Jesus Christ, the living Word of God, was on trial, witnesses were sought against Him, but none were found. “For many bare false witness against him, but their witness agreed not together.” (Mark 14:55-56). Likewise, as witness is sought against the written Word of God, the Byzantine text, witnesses are found, but their witness “agrees not together.” The revered Alexandrian manuscripts are proven to be inconsistent, and unreliable for reconstructing the original text. The Byzantine manuscripts, however, contain only minor variations.

The Byzantine text is also at least as old as the Alexandrian text, if not older. One of the principle arguments for the Alexandrian text, and against the Byzantine, is that the Alexandrian manuscripts are generally older than the Byzantine manuscripts. While there may be few, if any, Byzantine manuscripts dated before 350 A.D., this matters little to the “preservationalist,” as a 14th century manuscript can be as good as a 4th century manuscript. However, the Byzantine text-type is evident BEFORE 400 A.D., in ancient versions (translations), and in the quotations of early church Fathers. The Peshitta Syriac (145 A.D.) and the Old Latin (157 A.D.) translations both originated in the second century. Of these, Bishop Ellicott, a contemporary of Burgon, wrote “It is no stretch of the imagination to suppose that portions of the Peschito might have been in the hands of S. John, or that the Old Latin represented the current views of the Roman Christians of the IInd century.”9 These two versions show a definite Byzantine text-type, centuries before the oldest Alexandrian witness.10 A Gothic version of 330 A.D. also represents the text of the “majority of Greek manuscripts” (that is, the Byzantine text).11

Therefore, the Word of God is found in the Byzantine text-type, because it’s manuscript witness is in strong agreement, and it’s text is older, dating back to the second century at least, as evidenced by versions and church Fathers, and it shows complete continuity.

Is God’s preserved Word limited to just the original Greek and Hebrew? God’s inspired, preserved, infallible Word is also manifest in translations into the common languages. In theory, no translation can be as good as the original, but with God, all things are possible. If God could use men to inspire His Word perfectly, and preserve His Word perfectly, surely He could guide men to translate it perfectly. It takes faith to believe that God’s Word can be translated perfectly. But it also takes faith to believe that God has inspired and preserved His Word perfectly. Our God is the God of the impossible, but without faith it is impossible to please Him.

God, knowing that “faith cometh by hearing, and hearing by the word of God” (Romans 10:17), and wanting all to come to saving faith in His Son, Jesus Christ, has provided us with translations of His Word. The Bible word for translation is “interpretation.” Gifts of the Spirit include “divers kinds of tongues [languages]” and the “interpretation of tongues” (1 Corinthians 12:10). Interpretation of languages is a spiritual gift granted by God. God has provided us with the gift of interpretation, for preaching and translating the Bible into other languages. Pentecost is an example of the gift of tongues begin used to preach to multiple languages.

4. And they were all filled with the Holy Ghost, and began to speak with other tongues, as the Spirit gave them utterance.
5. And there were dwelling at Jerusalem Jews, devout men, out of every nation under heaven.
6. Now when this was noised abroad, the multitude came together, and were confounded, because that every man heard them speak in his own language.
7. And they were all amazed and marvelled, saying one to another, Behold, are not all these which speak Galilaeans?
8. And how hear we every man in our own tongue, wherein we were born?
9. Parthians, and Medes, and Elamites, and the dwellers in Mesopotamia, and in Judaea, and Cappadocia, in Pontus, and Asia,
10. Phrygia, and Pamphylia, in Egypt, and in the parts of Libya about Cyrene, and strangers of Rome, Jews and proselytes,
11. Cretes and Arabians, we do hear them speak in our tongues the wonderful works of God.

On the day of Pentecost, people of diverse nations heard the preaching of the Word in their native languages. Such was the greatness of this miracle, that everyone was amazed, for ALL spoke (as it appeared) in their mother tongue. When Paul stood up to preach, all heard him in their native tongue. God speaks with “other tongues.” He is not limited to Greek and Hebrew. “In the law it is written, With men of other tongues and other lips will I speak unto this people; and yet for all that will they not hear me, saith the Lord.” (1 Corinthians 14:21).

And at the ninth hour Jesus cried with a loud voice, saying, Eloi, Eloi, lama sabachthani? which is, being interpreted, My God, my God, why hast thou forsaken me? (Mark 15:34)

In this verse, which is the Word of God, the original (“Eloi, Eloi, lama sabachthani”), or the translation (“My God, my God, why hast thou forsaken me”)? The answer should be obvious. Other examples include John 1:42; Acts 9:36; Acts 13:8. The New Testament quotes the Old Testament repeatedly. The NT was written in Greek, the OT in Hebrew. Which then is the Word of God, the original Hebrew, or the Greek translation? It is self-evident, that BOTH are the Word of God. Therefore, God has inspired, preserved, and translated His Word for us today. God’s Word was inspired in common languages; it has also been preserved in common languages. “Do not interpretations belong to God?” (Genesis 40:8) But where is it? Which Bible version is the preserved Word of God?

For a Bible translation to be the Word of God, it must use the proper Greek text, and the proper translation method. It has already been shown that Byzantine text is the Word of God. Hence, all legitimate translations must be made from this text. However, many modern Bibles use the Alexandrian text as their basis, including the NASB, ESV, NIV, and NLT. These repeat the errors and omissions of their parent text. Translations using the Byzantine text include the KJV, NKJV, and KJV-ER.

2 Codex Bezae is now more commonly classified as “Western” as opposed to “Alexandrian.”