Heaven and earth shall pass away, but My words shall not pass away. - Jesus Christ, Matt 24:35
Luke Mounsey
Population Control
Print

Global warming has led to global alarm. However, man-made global warming is a hoax. Hundreds of scientists have come out against the notion. Carbon dioxide is a natural, harmless gas which all plants need to grow. Without CO2, plant life cannot exist, and therefore life as we know it cannot exist. What about climate change? It is natural. The planet goes through cycles of hot and cold periods, as shown by history. History has shown that the warm periods are to be preferred, as there is an abundance of crops, and the population flourishes. The junk science of man-made climate change is being used to push a global cap-and-trade system, which is basically a global tax. Under cap and trade, a cap or limit is placed on the emissions of industries. Industries which exceed their limit must purchase additional carbon credits, and industries which go under can sell their extra credits. The cap will be decreased over time, forcing prices upward. This system will cause prices on everything to increase, especially electricity and gasoline. However, even if the extremely low per-capita emissions are achieved, growing population levels will offset this reduction. In order to achieve the CO2 levels this junk science demands, the population levels will also need to be reduced. A large population simply can’t exist at these levels, it is claimed. Therefore, a great reduction in population is demanded. The final solution to the global warming “problem” is a massive reduction of the population levels. 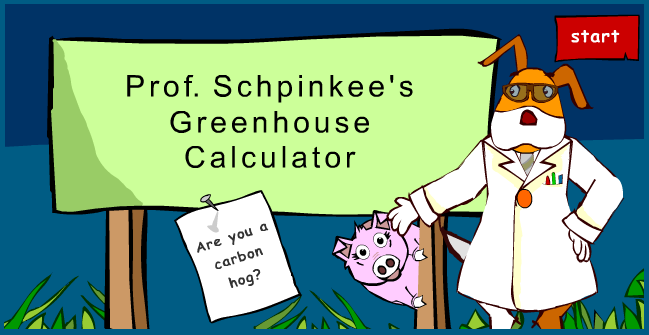 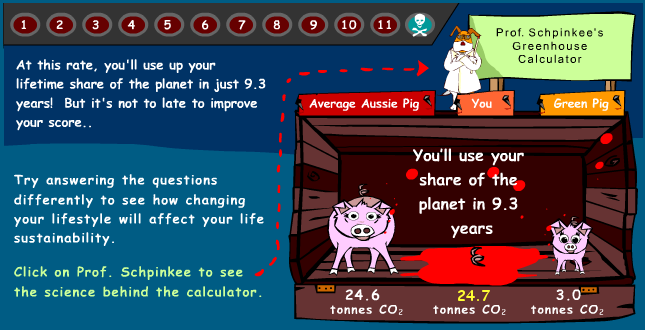 and after a graphic pig explosion, it tells the users that they should be dead.

The user’s pig grows or shrinks as they indicate their use of various forms of energy. When they are done, their pig explodes, sending blood and guts everywhere. (This is definitely not appropriate for children.) The system then gives them the age at which they should die, so that they don’t hog more than their fair share of CO2 emissions. If you enter the default settings, those for a typical westerner, it will tell you that you will use your “fair share” by age 9.3 years. This implies that the user should die before they are ten years old. Does this mean that if you use up your carbon allotment and cannot afford more credits, you should die? Yes, this is extreme, but remember, it is a globalist propaganda tool.

As each person has their own carbon footprint, more people means more footprint. This supposed over-population is fueling global warming. However, the Bible tells us to go forth and multiply, and have dominion over the earth. God formed the earth to be inhabited.

And God blessed them, and God said unto them, Be fruitful, and multiply, and replenish the earth, and subdue it: and have dominion over the fish of the sea, and over the fowl of the air, and over every living thing that moveth upon the earth. (Genesis 1:28).

For thus saith the LORD that created the heavens; God himself that formed the earth and made it; he hath established it, he created it not in vain, he formed it to be inhabited: I am the LORD; and there is none else. (Isaiah 45:18)

Despite these Biblical mandates, environmental groups are complaining that current population growth is unsustainable. In the future, they claim, there will not be enough resources for the exploding population to live a the basic standard of living. The Optimum Population Trust (OPT), an environmental think-tank based in the UK, stated,

While the world’s climate has always varied naturally, the vast majority of scientists now believe that rising concentrations of greenhouse gases in the earth’s atmosphere, resulting from economic and demographic growth over the last two centuries since the industrial revolution, are overriding this natural variability and leading to potentially irreversible climate change.

Andrew Ferguson of the OPT stated that the population needs to drop to 2.1 billion to “stabilize carbon dioxide” levels. The openly advocated methods of population control include education of women about birth control and abortion, and providing them with these options. While much of this focus is toward the third world, it is also being directed toward the first world.

There is an ongoing environmental movement against having large families. The OPT encourages couples to not have more than two children, through their “Stop at Two” campaign. This is advertised as the earth-friendly thing to do. The OPT insists that having large families should be frowned upon, just like driving gas-guzzling cars and taking frequent long flights. The pressure to reduce family size is heightened by the notion of carbon legacy. Carbon legacy states that you are responsible, not only for your own emissions, for those of your children, grandchildren as well. A New Scientist article titled “Children come with high carbon cost” stated

With rising future emissions, each extra child in the US would eventually result in eight times the lifetime carbon footprint of the average US resident today. Even with constant per-capita emissions, it’s nearly six times – or nearly 10,000 tonnes of CO2.

An Australian professor has insisted that parents be taxed for having children. Associate Professor Barry Walters stated that couples should be taxed for having more than two children, to offset their carbon emissions. However, his ultimate goal is a baby tax of $5000 per child at birth, and $800 per child per year to offset emissions. Therefore, children are bad for the planet, and the size of families must be limited to save the planet from the hoax of global warming.

The concept of carbon legacy has led some to decide never to have children. These “voluntarily” accept sterilization to save the planet. One of these is Sarah Irving, as reported in the UK’s Daily Mail:

Most young girls dream of marriage and babies. But Sarah dreams of helping the environment – and as she agonised over the perils of climate change, the loss of animal species and destruction of wilderness, she came to the extraordinary decision never to have a child. “I realized then that a baby would pollute the planet – and that never having a child was the most environmentally friendly thing to do.”

Her fiancé, Mark Hudson, adds “That’s why I had a vasectomy. It would be morally wrong for me to add to climate change and the destruction of Earth.” Children are pollution? Having children destroys the earth? Having children is morally wrong? This thinking is clearly warped, yet it is exactly what the global controllers want. Thus, it is encouraged by the so-called environmental experts, such as the OPT. However, the conditioning gets worse. The article continues to cover Toni Vernelli, who swore she’d never have children to save the planet. When her contraceptive failed, she was “forced” to have an abortion. “I didn’t like having a termination,” she said, “but it would have been immoral to give birth to a child that I felt strongly would only be a burden to the world.” It is immoral to give birth, but acceptable to commit murder? These morals are twisted beyond belief. Talk about calling good evil and evil good. But environmentalism is the new religion, as Vernelli holds her beliefs with “religious zeal.” She stated, “Having children is selfish. It’s all about maintaining your genetic line at the expense of the planet.” She was eventually sterilized “to protect the planet.” So, children are bad for the planet. Couples should not have more than two, and should be encouraged not to have any. This is the current trend, the “green” thing to do. And those who have more than two children should be taxed to offset the extra CO2. However, this smacks of the one child policy in China, where forced abortions and sterilizations are the norm.

Sterilization is also advocated as a form of birth control. In the United States, sterilization is offered by Planned Parenthood and EngenderHealth. It is important to note that all of these organizations have ties to eugenics. EngenderHealth was founded as the Sterilization League of New Jersey, with the goal of the sterilization of the physically and mentally disabled. Time Magazine published an article pushing voluntary sterilization in 1965. In 1981, the Association for Voluntarily Sterilization (now EngenderHealth) ran a campaign for “voluntary” sterilization. More recently, an article in Love It, a UK based womans magazine, boasted sterilization as the perfect birth control, and referred those interested to Marie Stopes International. MSI, a UK provider of abortion and other “family planning” services, offers sterilization to both women and men. MSI was founded by Marie Stopes, a known eugenicist and Nazi supporter. Planned Parenthood was founded by Margaret Sanger, a radical eugenicist. Think eugenics was a thing of the past? Think again. In September 2008, Louisiana state representative John LaBruzzo has proposed that the poor be “voluntarily” sterilized. He suggested that poor women be paid $1000, and poor men $500, to accept the procedure. This, he claims, would reduce the number of “generational” welfare recipients.

The ultimate agenda is far worse than sterilization and abortion. The History Channel and the National Geographic Channel both aired similar documentaries within several months. These two videos, Life After People and Aftermath: Population Zero, both explore what could happen on earth in the months and years after humans suddenly and mysteriously disappear. In my analysis of Aftermath, I noted the repeated mention of the earth healing from man-made global warming. The program opens with the statement “If we vanish, could the earth recover, even erase all evidence that we ever existed?” I concluded that it’s hidden message is that the final solution to global warming is the annihilation of humanity. Aftermath ended with this shocking statement: “Earth is resilient. In time, it cleaned up every mess we left behind. All we had to do was get out of the way.” Life After People contains a similar message. We are being prepared for a massive population reduction by “educational” (reeducation?) specials like Life After People and Aftermath, as well as feature films such as 28 Days Later and I Am Legend. The globalists plan on reducing population levels by using more than just birth control, abortion and voluntarily sterilization.

In conclusion, global warming is not a problem, but it is being used to advance a radical population agenda. We are told that, for the sake of the earth, population levels need to be reduced. People are asked (or being conditioned) to have only two children, or even accept sterilization, to stop global warming. Abortion, birth control, homosexuality and other population control techniques are promoted. But none of these will produce the population decrease lusted after by the globalists. Something more dramatic is required, such as war, famine, pestilence or earthquake. The elitists are likely to cause much of this disaster themselves or through their puppet governments, but in a way that would hide their connection to it. Like global warming, the 2009 H1N1 (swine flu) is also not a problem, but it is being used for the advancement of a mass government vaccination campaign. As I noted previously, this vaccine could be potentially lethal. Will the swine flu vaccine be used create a population reduction incident? Extreme environmentalism, including global warming, is being used to advance the depopulation agenda. We can conclude that the final solution to global warming is massive reduction in population levels. And as portrayed in Afterlife: Population Zero, the final solution to the global warming problem is extinction of the human race.